The images did not load correctly. Please start the print process again.

The easy road to better driving – with Predictive Powertrain Control.

The standard Predictive Powertrain Control system provides a simple means of saving even more fuel with the Arocs. On motorways, country roads and city streets alike.

Advantages at a glance.

Whether on a steep hill, coming over a crest, when rolling downhill, in dips or on level ground, thanks to satellite-supported navigation and precise 3D maps, Predictive Powertrain Control can detect and react to upcoming driving situations at an early stage. In order to do so, Predictive Powertrain Control continually monitors the vehicle's kinetic energy and uses it on such occasions as coming over crests or on the flat for EcoRoll phases, which reduce drag losses and save fuel. The system also adapts shift sequences to the impending driving situation, applying fewer and larger gear changes, for example.

The smart integration of the Predictive Powertrain Control can also detect turning requests, for example, by setting the turn indicator and initiating a consumption-reducing rolling phase. It also integrates the extended Top Torque1070 in both the Standard and Power driving modes. 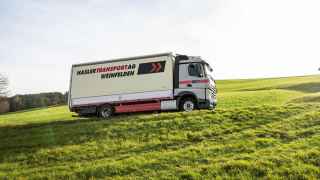 The right programme for every situation: Choose from Standard, Economy, Fleet and Power. Special requirements like off-road, heavy, municipal and fire are also covered.

And even within each driving programme, the driver can choose between four driving modes at any time1068 – with A and A economy as standard, with another automatic mode plus manual as an add-on,

Back to the top